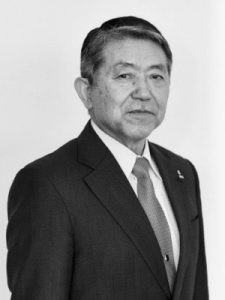 Shigeru Iwasaki served for many years in the Japan Air Self-Defense Force (JASDF), reaching the rank of General. During this time he qualified as a fighter pilot, and was regularly scrambled to counteract violations of Japan’s airspace by Russian and Chinese fighter aircraft.

In 2019, as a member of the Council on Security and Defense Capabilities convened by the Japanese government, General Iwasaki played a key role in the creation of new national defence programmes. He undertook a number of lecture tours nationwide in the defence arena.

His other professional roles have included operating as Special Advisor to Japan’s Government and Executive Advisor to All Nippon Airways.